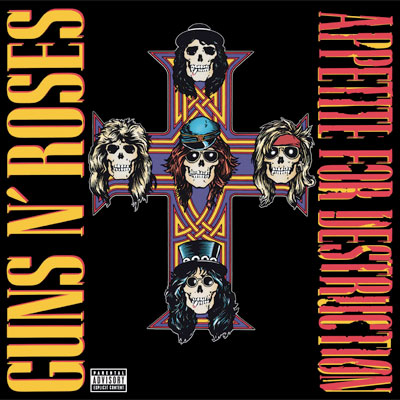 Appetite for Destruction is GNR's first album, and it was quite a feat for a debut album by a little known rock n' roll band from California. There was absolutely nothing wrong the hard rock sound of the singles/songs; it was, if fact, a perfect record.The singles form the album sounded as if they were recorded by Led Zeppelin -- that's how insanely good this album is! In fact, I'd go as far as saying this is the record of the 1980s, better than Micheal Jackson's Thriller or Bruce Springsteen's Born In the U.S.A

It took while for Appetite to fully embark its journey in the mainstream rock n' roll scene, you know, radio and MTV. But once it did,GNR single-handedly made heavy-hitting hard rock one of the popular genres of music on both radio and MTV.

Upon its release, albums debut single, Welcome to the Jungle, was as successful as the fame it enjoys today. However it did managed to put some light on the talent and artistry of the band as it landed in the top 10 of Billboard charts. Eventual singles like Paradise City and Sweet Child O' Mine were released to much more favorable critical and commercial success. As it's the case with all the good rock n' roll albums, you have to listen to this album in its entirety to fully appreciate the talent of the five members.

One, among many, highlight of the album is Slash's out-of-the-world riffs and solos. There's a certain distinctiveness in them that cannot be ignored; when your hear a certain riff you know it's from GNR. Slash took Joe Perry's bluesy rock licks and Eddie Van Halen's heavy style, and made his own recipe. The album, rightly so, solidified Slash as one of the best guitarist in the world at the time, and he still is. In fact, Micheal Jackson invited Slash to work on his Dangerous album immediately following the release of Sweet Child O' Mine.

All comments will be automatically reviewed by the system, and by the author afterwards. So follow the guidelines listed below; failure to do so will result in your comment being removed.